Days of strong sales in the week leading up to Black Friday and through Cyber Monday show preparations and planning for Holiday 2017 paid off.

Based on sales data in CJ Affiliate’s network, US and Canadian holiday sales revenue during Peak Week (November 20 – 27) increased 45% over 2016. The growth is occurring across most retail categories and publisher business types.

Peak Week, which encompasses the Monday before Thanksgiving through Cyber Monday, is a week of shopping that can make or break a retailer’s holiday season—last year, nearly 30% of US holiday season sales in the CJ Network occurred during this same time period. Peak Week performance is a strong indicator of overall holiday season performance, and retailers have been pushing up deals earlier in the week to encourage more shopping—and the strategy appears to be working.

Early week revenue growth on the days leading up to Thanksgiving averaged 49%.  Total revenue and order volume, of course, was greatest on Black Friday and Cyber Monday. Yet such pre-Black Friday growth shows that strong offers, released early, are finding a responsive audience amongst affiliate shoppers.

Sales on the Sunday of Peak Week (Nov. 26)—just one day before Cyber Monday—increased 53% YoY.  Sunday’s share of Peak Week sales rose to 11%, making it the third-largest sales day of the week behind Black Friday and Cyber Monday. Sundays, in general, have become a strong day for ecommerce sales and appears to intensify during Peak Week in the US with the long Thanksgiving weekend allowing shoppers more time to fit in extra shopping.

Throughout Peak Week, smartphones were increasingly used for purchasing—25% of all Peak Week sales were completed on smartphones, compared to 23% last year, an increase of 10%. Thanksgiving Day, when many people are away from their desktop or laptops for one reason or another, had the highest rate of smartphone sales during the week—28% of total orders. Usage of smartphones for purchasing increased 11% and 14%, respectively, on Black Friday and Cyber Monday. Tablet usage for shopping again this year declined. 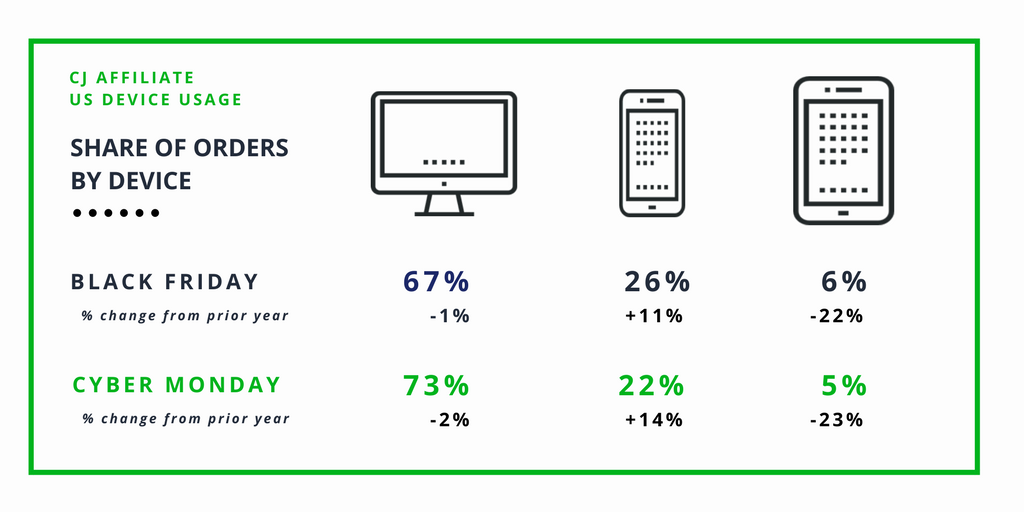 Methodology: Growth values were calculated using same store retail sales tracked in the CJ network through November 20 – 27, 2017 (Peak Week) and compared against 2016 same day sales. These growth values may alter as additional sales are reported, corrected and/or returns are processed.

Reach Overseas Audiences this Q4 with These APAC Publishers

The Biggest Takeaways from Prime Day Affiliate Sales in 2022