Purchases of computers, clothing, home goods and shoes led to strong year over year performance in the CJ network on Black Friday and Cyber Monday and a high-growth start to the Holiday 2018 shopping season.

For many, the shopping this year started early. Early season deals promoted the week before Thanksgiving caught U.S. shoppers’ attention and spend—orders in the week prior to Peak Week were up 16% overall. As Thanksgiving Day sales promotions picked up, daily order volume steadily increased to reach its highest point on Cyber Monday. While Cyber Monday’s order growth was less than Black Friday’s, more orders were completed on Cyber Monday overall.

Black Friday’s higher basket sizes, driven by computer and electronics purchases, drove 42% growth in revenue while orders increased 30%, making Black Friday, by many measures, the most successful day of the Peak Week period. 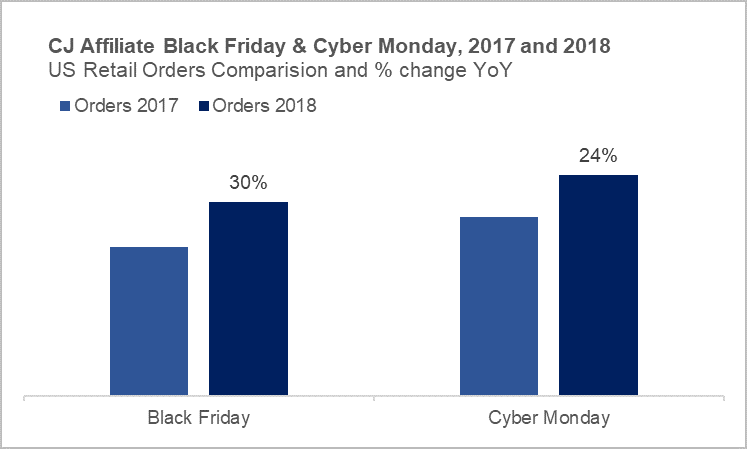 Early shopping did not take away any of Peak Week’s importance to a successful start to holiday performance. The eight days of Peak Week 2018 accounted for 54% of November retail orders and 60% of retail revenue.

In addition, Thanksgiving, Black Friday, and Cyber Monday remain the best sales opportunities for affiliate marketers, as this is where the greatest year over year growth occurs.

Much of the revenue growth on Thanksgiving Day and Black Friday was fueled by increases in average order values—basket sizes on Thanksgiving Day and Black Friday were up 10% and 9%, respectively, partly due to a greater volume of higher-value jewelry and home electronics purchases this year than last year. Order values on Cyber Monday increased 1% and growth during Peak Week was 2% overall.

Reaching Shoppers on the Go

Share of orders completed on desktops averaged 64% during Peak Week, with 68% of sales on Cyber Monday occurring on a desktop (one of the highest rates of the Peak Week period).

Methodology: Growth values were calculated using same store retail sales tracked in the CJ network through November 19 – 26, 2018 (Peak Week) and compared against 2017 same day sales. These growth values may alter as additional sales are reported, corrected and/or returns are processed.

How Marketers Can Flourish this Spring with Top Promotional Tips

A Look Back at 2021’s Peak Shopping Performance

Valentine's Day in the Time of Covid