With more than 21 million retail consumers and 5.5 million transactions analyzed, this is the largest affiliate incrementality study ever conducted.

Digital marketing today includes a wide range of channels that are vying for investment. With a myriad of ways for consumers to connect with brands, the bar has been set higher than ever for channels to prove their value. For brands to intelligently invest, it is important for them to truly understand the value each channel delivers. In this vein, CJ Affiliate set out to measure the incremental value that the affiliate channel delivers to brands.

Using test and control methodology, we split a population of 20.2M shoppers into two groups with only one difference between them: the test group had an affiliate click. We further controlled for brand awareness, seasonality, and time to conversion.

These results are validation that the customercentric approach of the affiliate channel is providing value to consumers as well as brands. Consumers seek out publishers to help answer questions around where to buy, what to buy, and how much to spend. This third-party perspective lends credibility to brands with whom a consumer may not be familiar, leading to higher new-to-file rates. Repeat customers also benefit from an unbiased resource. Affiliate marketing provides incremental value because these wide variety of customer needs are met through publishers who provide this information and make consumers confident in their choices.

To put these findings into practice, brands should invest more in the affiliate channel to leverage the confidence publishers bring to shoppers by credibly meeting consumer needs— which results in higher conversion rates and spend, across both new and repeat customers.

Incrementality is a subset of the overall value that was measured. It focuses on the additional value the channel provides that would not have occurred without the channel present. Incrementality asks the question, “Did that set of marketing touch points influence customer actions (knowingly or unknowingly) to drive more value?” Incrementality for any marketing channel is about successfully influencing shopper behavior and meeting consumer needs such that you gain more value with the channel versus without it.

This incrementality study used the widely accepted test and control methodology. The test group of users exhibits the behavior that is under study: in this case, affiliate clicks. The control group of users are similar to the test group, but the only difference is they did not click on any affiliate links during the testing period. By analyzing the differences in behavior between the test and control groups, the impact that affiliate clicks have on key performance metrics can be measured.

Brands included in this study are highly recognizable household brands, with a combined total revenue of approximately $31B.

Visitors to an Advertiser’s website who have clicked on any affiliate link at any point during September 2018 (1.1M Affiliate Shoppers)

Visitors to the Advertisers’ site who did not have an affiliate click during September 2018 (19.1M Non-Affiliate Shoppers)

The Non-Affiliate Shopper group members had to at least visit the brand’s site during September 2018. This controls for shoppers’ brand awareness. It also controls for the fact that these shoppers are in market and already know about the brand.

Both groups were observed and measured during the exact same time frame. 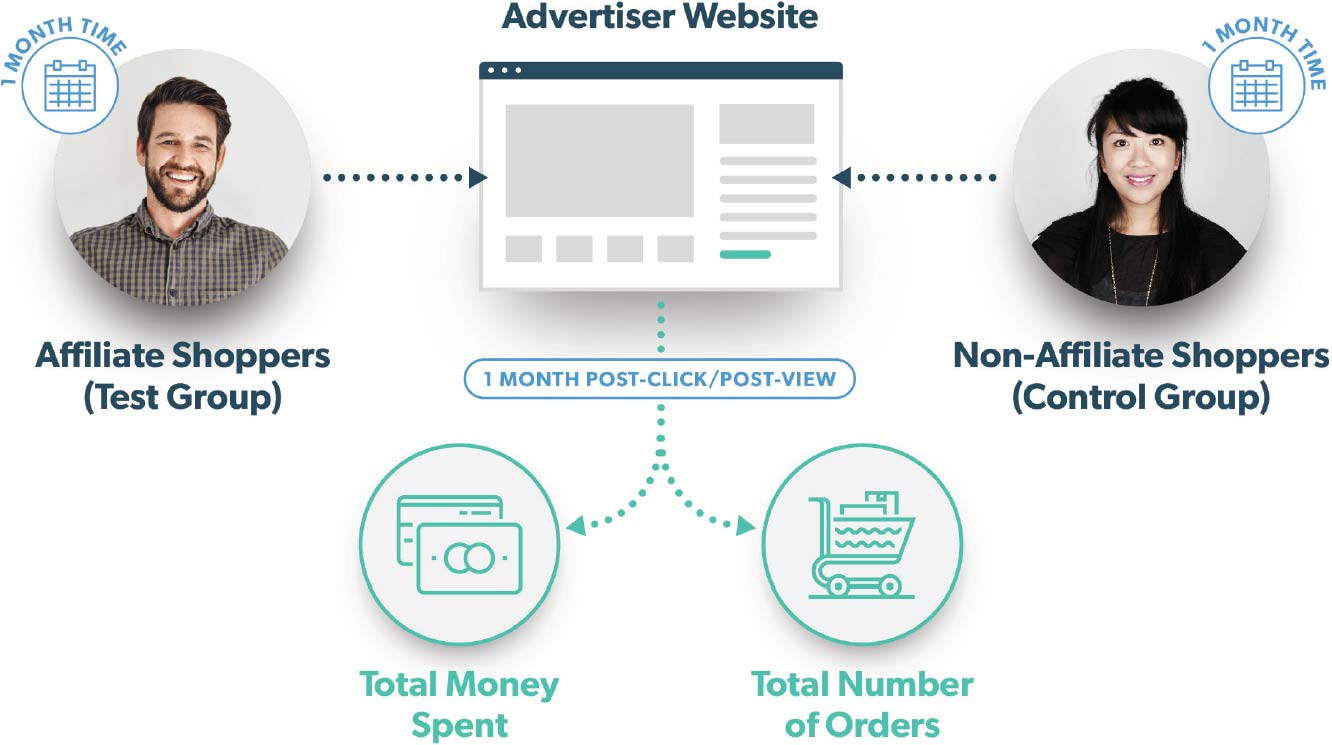 Deterministically and cross-device matched to unique and anonymous customer profiles. These profiles may be associated with multiple emails, devices, and cookies. This matching methodology eliminates double counting between user groups and allows us to accurately measure their shopping behavior.

Shoppers who have made at least one purchase with the respective brand.

Total customers divided by the number of shoppers.

Total revenue in one group divided by total number of customers in the same group.

Total sales revenue divided by the total number of shoppers.

Brands define their custom new-to-file definition. If no custom definition was given, then CJ defines a new customer as someone who has not purchased from the brand in the past 2 years.

While new customers converted through affiliate complete about the same number of orders and spend less than Non-Affiliate Shoppers, affiliate is much stronger at getting new customers to ultimately convert when compared to non-affiliate channels.

During the observation time frame, when looking at return customer performance for the AffiliateShopper group compared to the Non-Affiliate Shopper group...

Affiliate compounds the value of returning customers by getting them to purchase more, spend more, and convert at a higher rate when compared to non-affiliate channels, leading to greater revenue per shopper and lifetime value.

The results that we uncovered through this study demonstrate the unique ability that affiliate has as a digital marketing channel to address a wide variety of customer need states through publishers. These publishers offer trusted third-party perspectives to meet customer needs such as: getting introduced to new brands, researching and comparing products, saving money, earning cashback, and much more. It follows then that a brand’s spend would return more in terms of key KPIs such as orders, AOV, conversion, and revenue.

How can brands use this information to intelligently grow their business?

Affiliate marketing is a performance-based digital marketing channel that has been around for over 20 years. In the wide variety of marketing channels that exist today, affiliate marketing is the only channel that reaches and influences consumers worldwide, at every part of their purchase journey, both on and offline. Advertisers/Brands pay publishers for desired actions (sales, sign-ups, etc) when those actions take place. Publishers receive this commission based on their unique respective abilities to meet a myriad of customer need states. Networks, such as CJ Affiliate, help to facilitate these relationships, as well as track and optimize performance through innovative technology and data-driven strategies.

CJ Affiliate is the global leader in affiliate marketing. Founded in 1998, CJ Affiliate services nearly 4,000 brands/advertisers and over 70,000 active publishers from across the world, accounting for over $15 billion dollars in annual client revenue.

Learn more about this study and find out how we can help you intelligently grow your business.