Are you ready for more cuteness? We asked CJ'ers across our global offices to share their furry friends.

This is part two of a multi-part series where we highlight the pets of CJ. Read on to learn more about these cuties—they're sure to brighten your day!

"Iris was adopted a couple of weeks before I entered CJ, so I guess if these were the Oscars, I would have to thank her for all my success so far! (kidding…sort of!)

I'm one of those weirdos that loves a normal person's name for a dog, and strange names for humans, so we decided to name her IRIS because 1) it's a person's name here, and 2) she is the most nice and colorful dog in the whole world, much like a rainbow.

Plus, 'rainbow' in Spanish/Portuguese translates to arco-IRIS! :)" 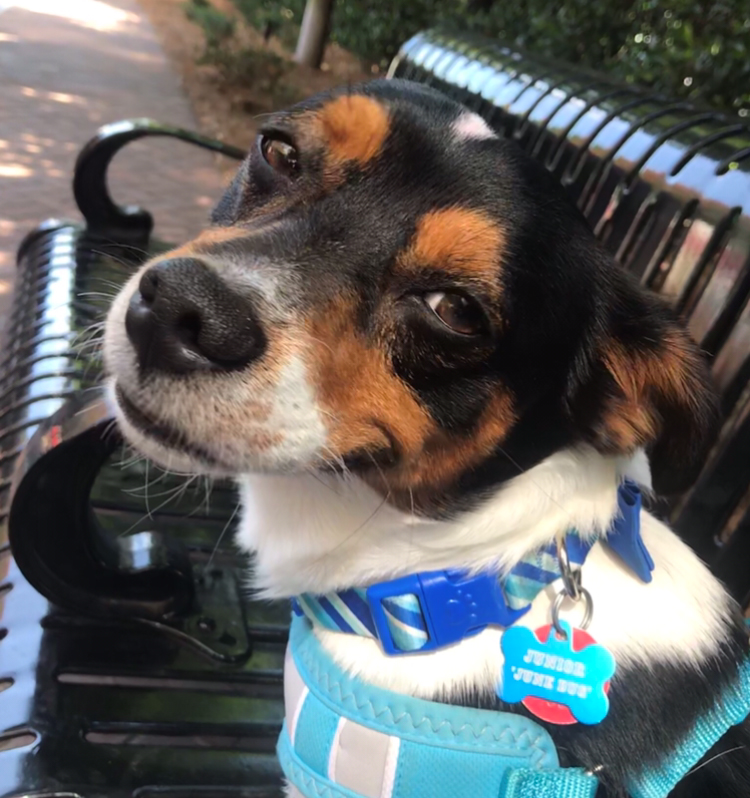 “After moving to Atlanta, I was looking into adopting a dog (specifically a Pit Bull, since our animal shelters are packed with them), but as fate would have it, I received a call from my uncle that a small dog had been tied up and abandoned outside of his workplace. I agreed to take him in and find a rescue that I could foster him under until his forever family was found. Long story short, that family ended up being me! In September of 2018, Junebug became my first ever ‘foster fail’. From day one he's been such a character and now he loves being the pack leader for any new fosters we bring home, showing them how to live The Good Life for when their forever families find them, too.” 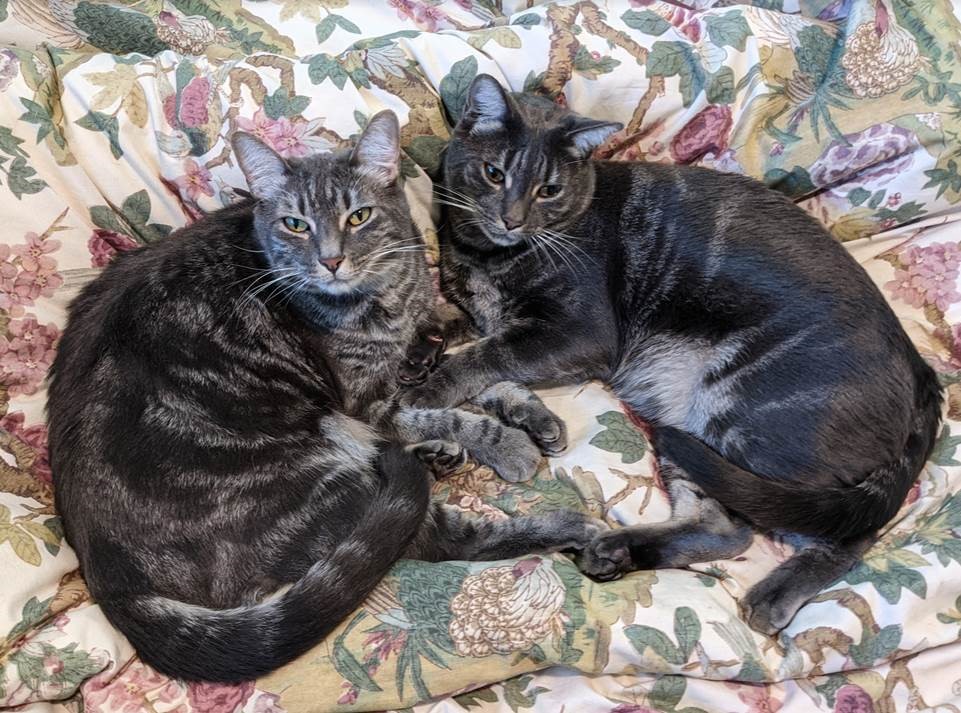 "After our cat of 16 years passed away in 2019, my husband and I decided that mid-pandemic was the perfect time to welcome a bit more chaos into our lives. Buddy Rich (named after the famous drummer) and Bob Fosse (named after the well-known choreographer) are three-year-old big-boy brothers each weighing in at over 20lbs! These two are always up to something—they offer hours of entertainment, are BFFs with our toddler daughter, and make very regular appearances on my video calls." 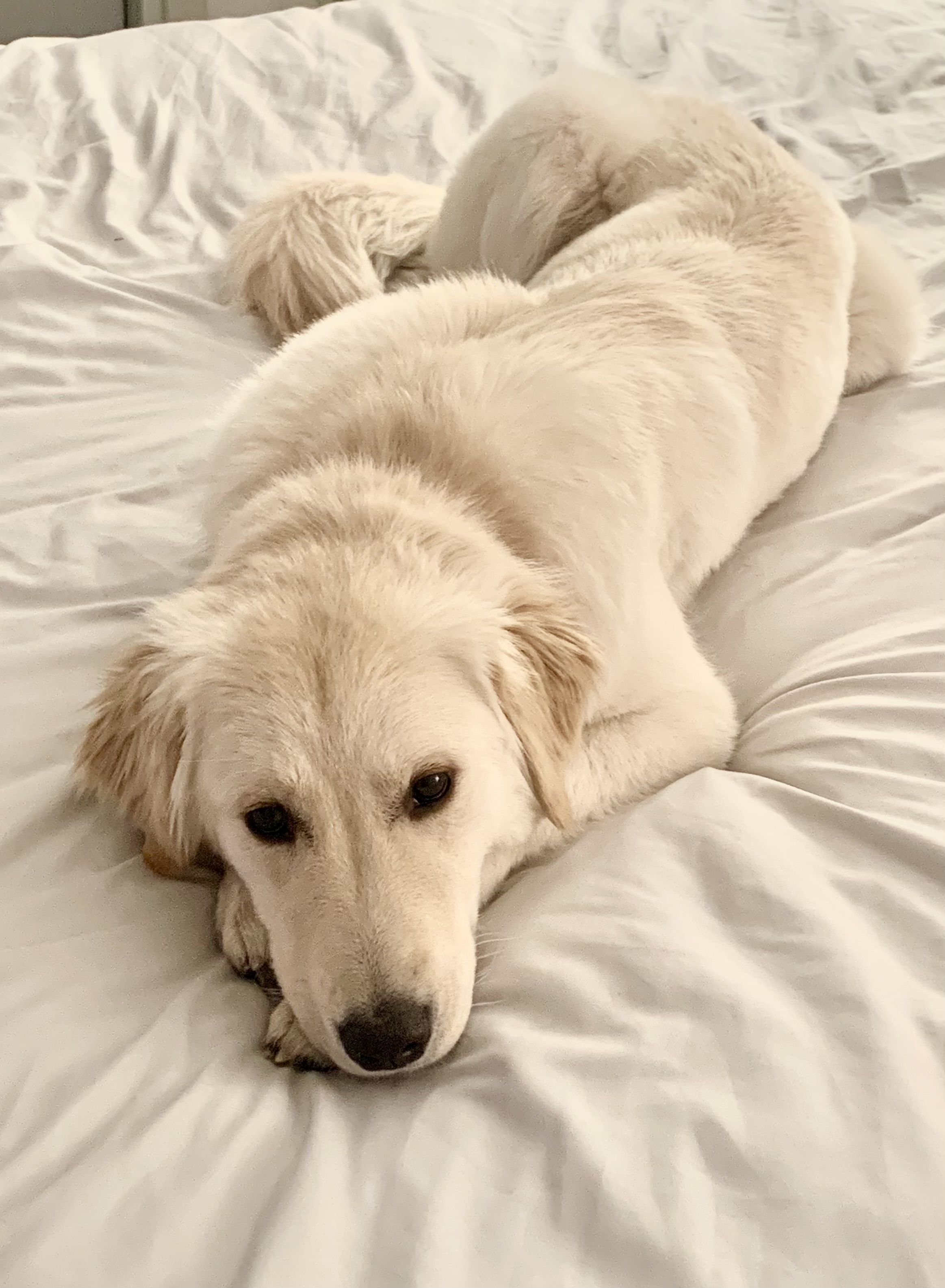 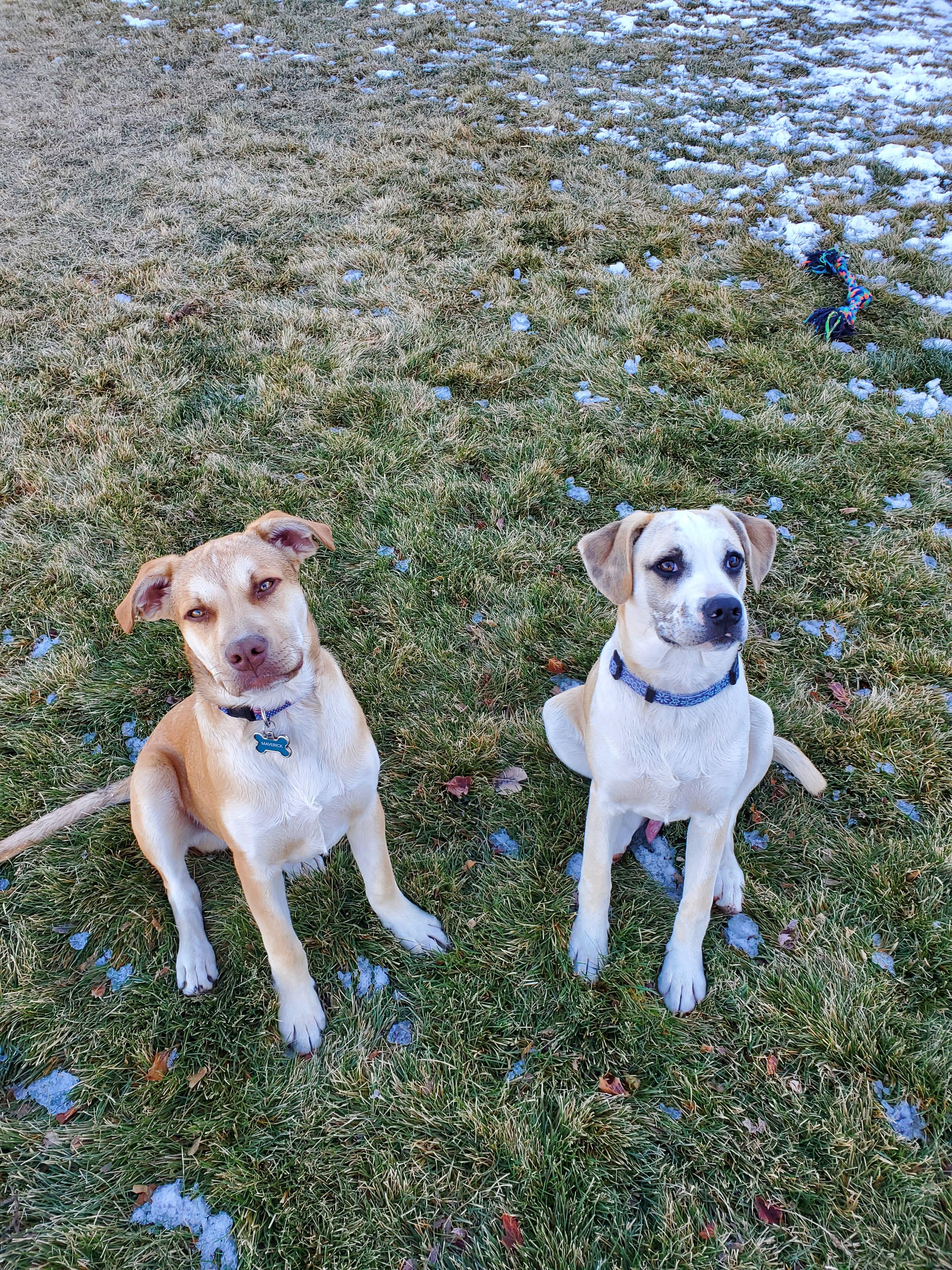 “My parents adopted Maverick and Goose in July 2020 from their local veterinarian. They're brothers and boy do they act like it! Being that they're less than a year old, we're still trying to put our fingers on their defining character traits, but they are quite different from each other.

Maverick is the alpha and sort of leads/mostly wins the roughhousing that occurs across the backyard and inside the house, but that's also because Goose does enjoy being submissive. It is very common for Goose to just roll over on his back and give you an ‘okay...rub me’ look. We've nicknamed them the ‘Destructo Twins’, but we're now starting to think that Goose is the leader in chewing outdoor cushions and ripping up the sprinkler system. They’re very adorable but rambunctious, to say the least!"

"Linus and Lucy are a brother and sister duo that my wife and I adopted as kittens in early 2016. We were actually second on a waitlist to get them and luckily the couple ahead of us passed on the opportunity. They’re the most affectionate cats I've ever seen, constantly wanting pets and attention. They’re nearly inseparable and meow loudly whenever a door closes and separates them into different rooms. They occasionally fight (like all siblings), but always makeup and often snuggle together for their naps." 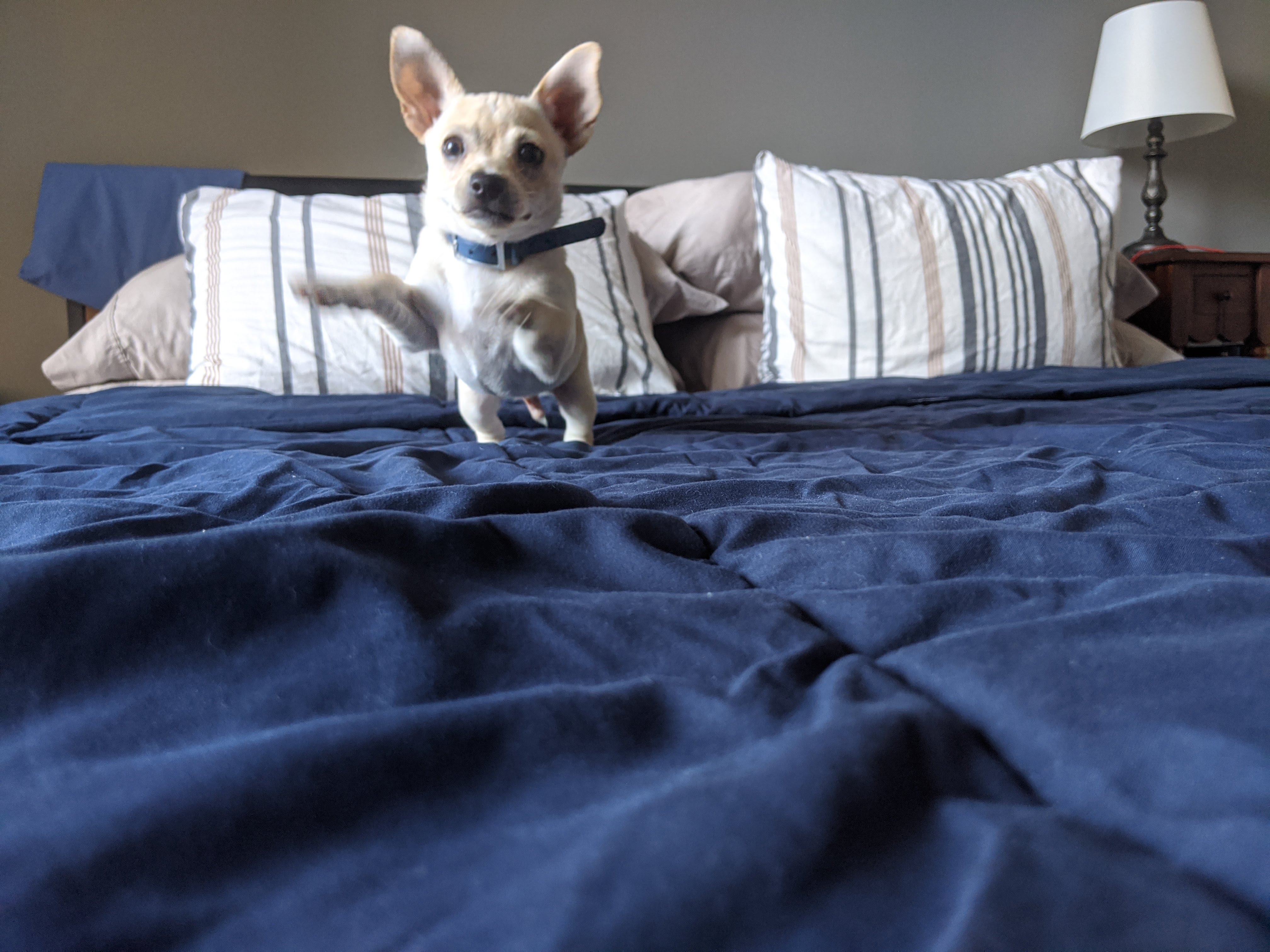 “Ermi was adopted in February from a friend that rescued his mom but didn’t know she was pregnant. He's a hype puppy that hops like a bunny and meows like a cat.” 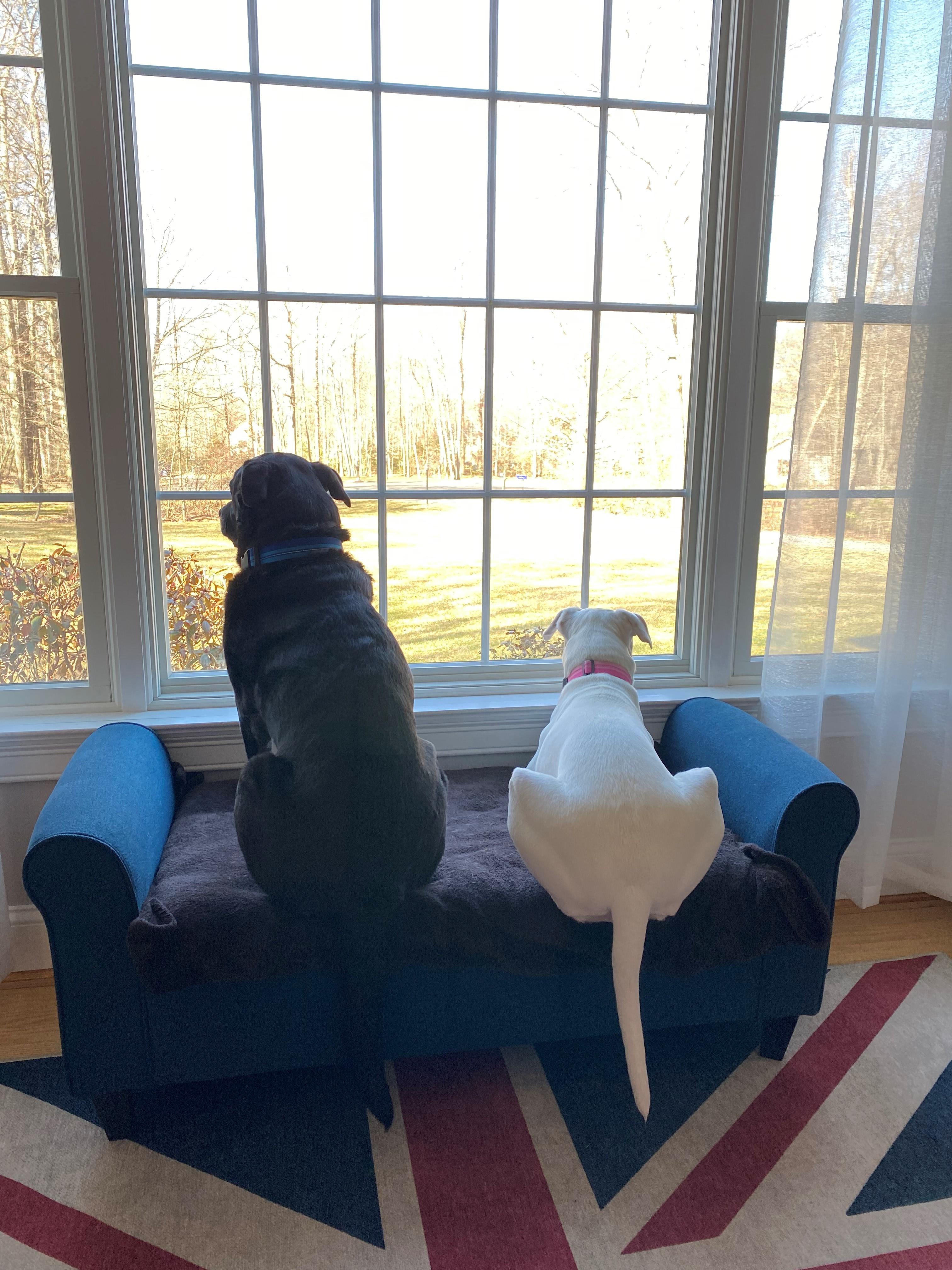 "Thor and Scarlet are both rescues—we adopted Thor in 2010 and Scarlet in 2019. Despite their nine-year age difference and not meeting each other prior to us bringing Scarlet home, they immediately hit it off! They’re inseparable, except for when Thor is tired and needs a break from Scarlet's never-ending energy. We recently moved into a new house and they’ve already found all of their squirrel watching spots, including one right in mom's office." 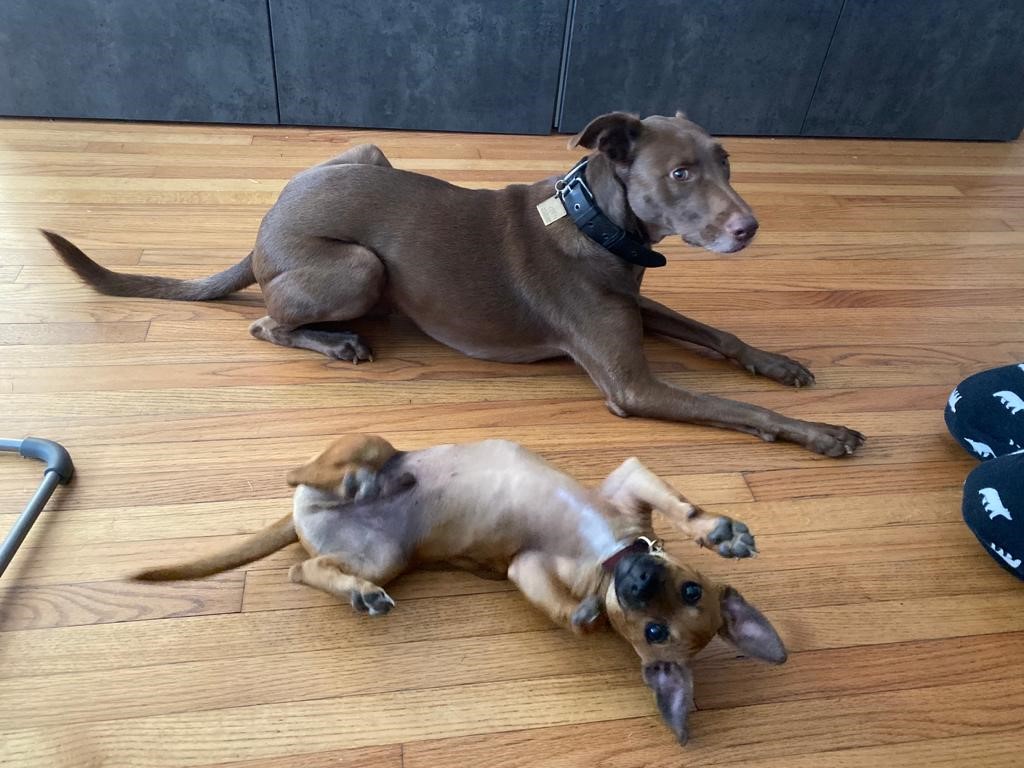 "Coen and Roux were both adopted from DAWG—Coen shortly after we moved to the US, and Roux 18 months later. Coen was two when we adopted him and had a hard start to life; he'd been in and out of the shelter since he was a puppy and had had some rough treatment. We've been working on that for three years, and he's completely come out of his shell and loves his friends, but it still takes a lot of work to earn his love! We adopted Roux as a small puppy, and he has the opposite problem...he licks anything that moves and falls in love at the sight of a Milk-Bone!" 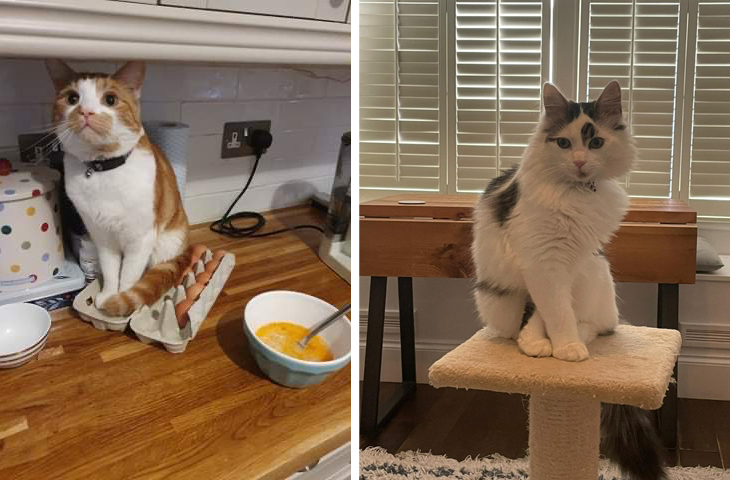 "We got our firstborn fur-baby, Sonny, in April 2019 and he gets his name from the great Tottenham Hotspur striker, Son Heung-min. Sonny is the most gorgeous, loving, ginger Tomcat, although he can be quite stubborn and likes to have his own way—especially when it comes to keeping his little brother in line. His favorite food is often whatever is on our plate when eating our dinner in the evening and his greatest skill is detecting the noise of a tuna tin being opened from 1km away. Sonny can mostly be found on paw-trol around the neighborhood and likes to spend his time hanging around with foxes, and climbing trees to chase birds—he won't admit it, but he’s a terrible hunter as he’s very clumsy and his bright orange fur always gives him away.

Then came Winston our sweet, sensitive, and fluffy badger cat. Winston is just over seven months old. We got him in November. We initially got him as Sonny seemed a little lonely after he lost one of his neighborhood friends, however, Sonny still isn't 100% sure on his little brother and seems a little concerned about the levels of attention he gets. Winston has a very cheeky personality and is much more of a homebody than Sonny, although he is starting to become a little more inquisitive about the outside world. Winston's favorite things are drinking water from the tap, making dens in cardboard boxes and (more annoyingly) waking the entire house up at 2:30am, 3:30am, and 5:30am every morning. We love both our boys equal amounts and we love the difference in their personalities—we wouldn't change anything about them…well, maybe the early wake-ups, and eating dinner in peace might be nice sometimes!”

“My parents got Gracie when I was 25, so I've obviously always loved her, but she was ‘my parents' dog’. Since living together during the pandemic, though, we've become thick as thieves. I've taught her to catch treats at high altitude/velocity and eat off a fork like a human. We're so tight that she cries anytime I leave the house—even on 20-minute runs to the grocery. I dream of bringing her back to New York with me, but she's deathly afraid of the stairs. She's 190 lbs of baby. 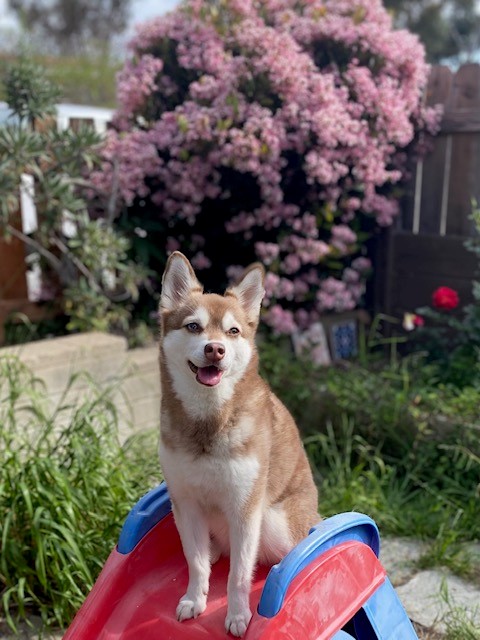 “White Fang is a five-year-old Alaskan Klee Kai, which is its own breed akin to a miniature husky. He gets his name from the Jack London novel, White Fang, the wild wolf-dog who befriends a human. ‘He's a pistol’ was the first note we were told the day we picked him up, and he's a spunky redhead with lots of personality! We could never have imagined he would be the best cuddler in the world.” 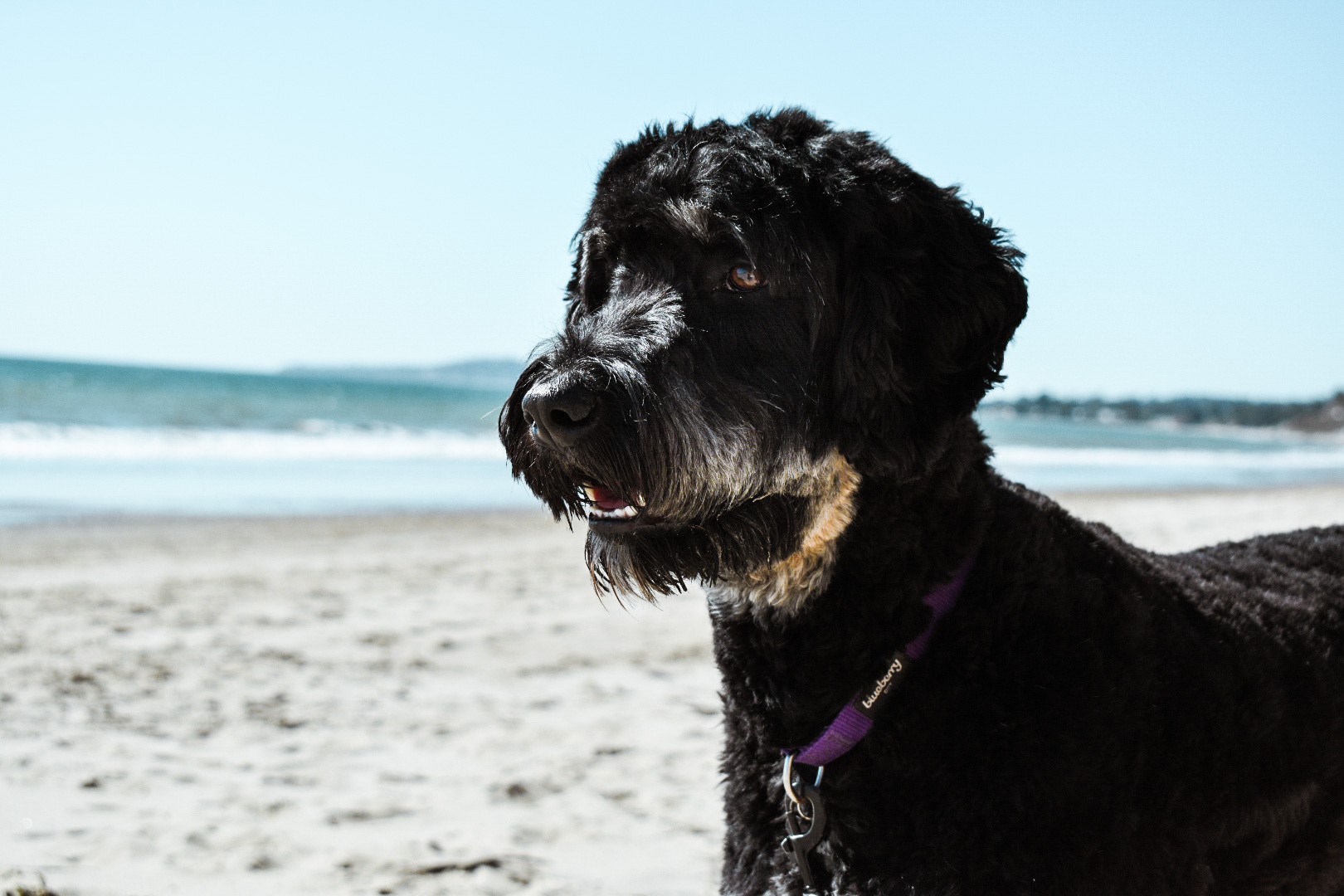 "Meet Rori, our two-year-old Bernedoodle! My husband and I adopted her the day after we got engaged in March 2019, so it’s a time in our life that is such a fond memory. We wanted her name to be related to Santa Barbara and naming her after one of our favorite ice cream shops in town seemed fitting—she’s such a sweet girl!

Rori has a big personality and is a complete gentle giant. She thinks she’s a lap dog so no matter what the weather is like, she wants to snuggle with you. She will quite literally do anything for a treat—seriously though, we don't even have to say any commands and she does them all before you can even get the treat out of the bag. One of our favorite quirks about Rori is that when she knows it's mealtime, she starts hopping around the house while bucking her back legs like a pony! She just can't contain her excitement for eating." 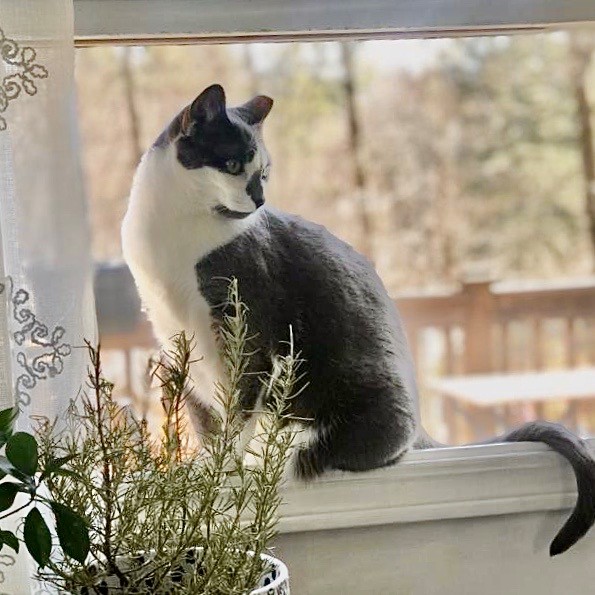 “Dove, AKA Dove Kardashian, Dovely, DoveMyLove, and various other 'pet' names, is the pinnacle of eleganza extravangza. I adopted her as a rescue back in September 2015, and she has brought me so much joy over the years! Cats are infamously moody with their sassy moments, and I'm purrroud to report that Dove lives up to those stereotypes like the true diva she is! Her favorite activities are gnawing on expensive plants, napping (as one does), birdwatching (as one does), and throwing side-eye when she's just NOT having it.” 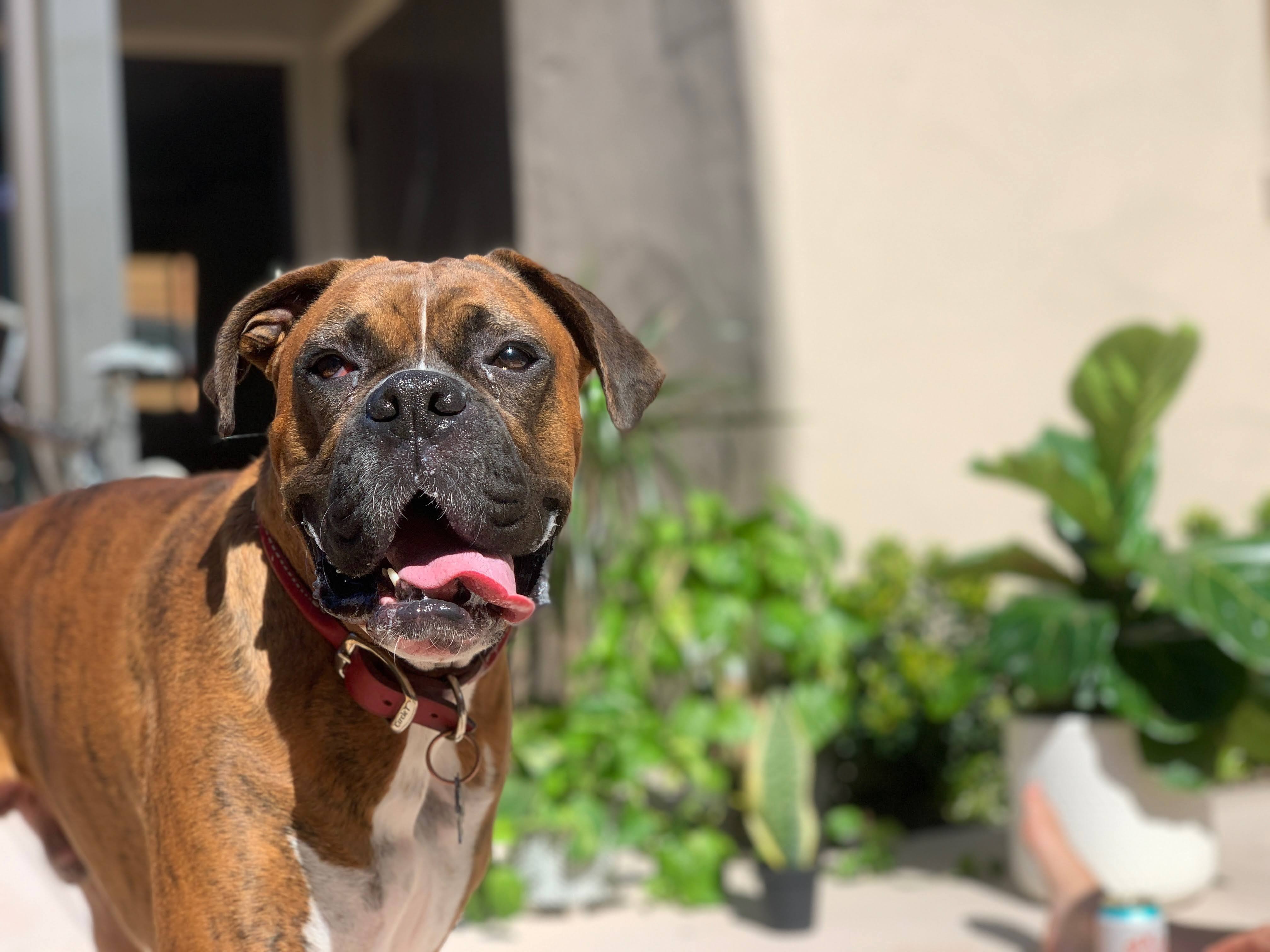 “Enzo is the sweetest boy! He is four years old and I got him my third year in college. Even though he weighs 75 pounds, he has no problem making himself at home by sitting on your lap! In his free time, Enzo enjoys frolicking at the beach and eating sticks!”

Career Conversations Series: Meet the Expert! Dana Shell Rolls with the Punches and the Partnerships