What's cozier than furry friends in the fall?  CJ'ers across the globe share all the warm and fuzzies that make them love their pets.

This is part three and the final edition of a multi-part series where we highlight the pets of CJ. Read on to learn more about these cuties—they're sure to brighten your day! 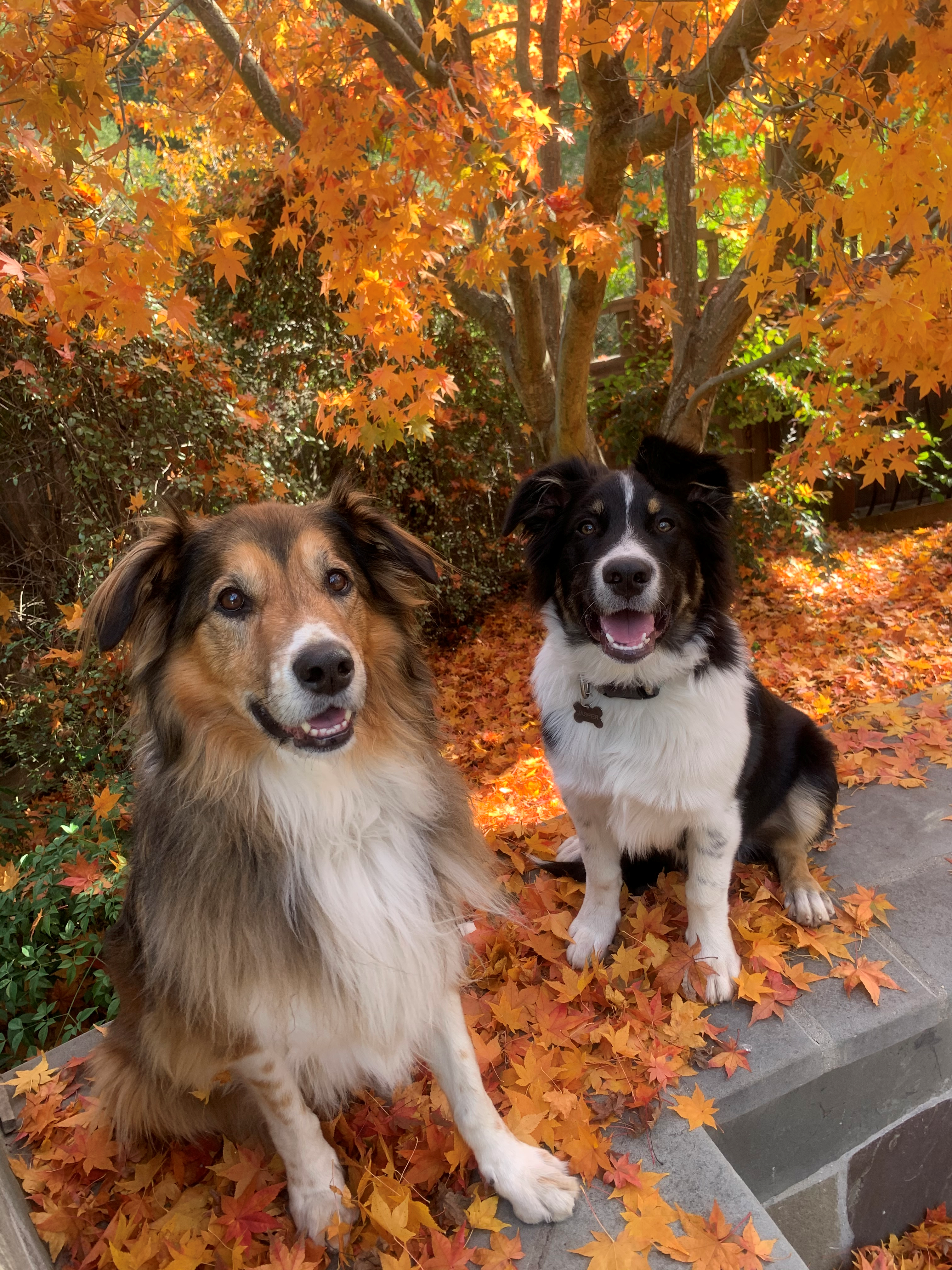 “Calvin and Jasper are my two English Shepherds, and Calvin is Jasper's uncle. We've had Calvin for eight years and he has been the perfect dog, so when the pandemic hit, we decided to get another. They're so loving and have hilarious personalities, and although Jasper never seems to run out of energy, he has been the perfect addition to our family.” 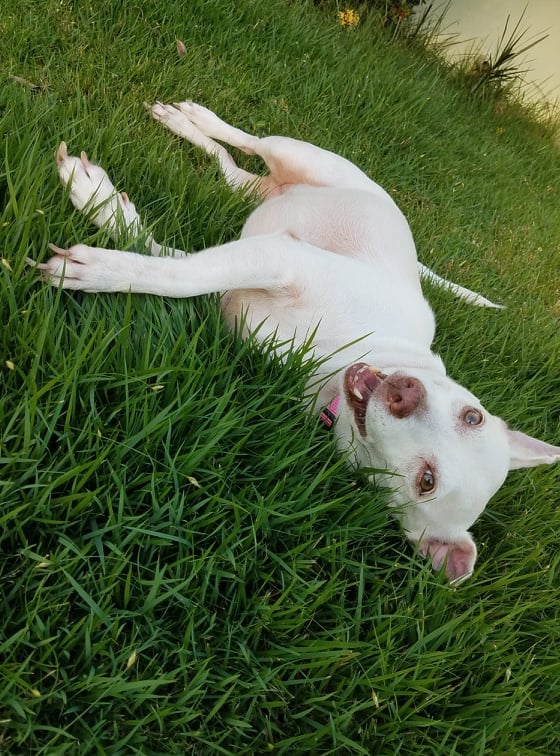 "Angel is my beautiful dog child/daughter. I adopted her back in 2007 when she was only two months old. Her coat is a white cream color, which inspired her name. She was quite the rambunctious little pup, so the idea of naming her ‘Angel’ was funny to me because I would say, ‘She was anything but...’. When I adopted her, it was clear she was part Pitbull, but I never knew what the other half was. I only recently found out she's a Pitbull and Pharaoh Hound mix, which just made her 10x COOLER because I LOVE Egyptian culture.

She mainly likes to nap on the couch all day next to me while I work and funny enough, in the morning she loves telling ME when she thinks I've slept long enough. She also enjoys food, barking at the moon, getting the zoomies, going on walks, taking short drives with the wind in her hair, and being towel dried. She gets wet ON PURPOSE in order TO BE towel-dried, but then again, I love getting wet in the rain, so I do see where she gets it from. She may be quirky, needy, and sassy, but no matter what she's mine. She's my good girl, always has been and forever will be. I love her so much."

“My girlfriend and I rescued Bella in June 2020 during the pandemic! She has been the best work-from-home companion I could have ever asked for. I've loved getting to know her this past year and she has become quite the aquatic adventurer! Her cuddles keep me sane, and I adore her even when she snores.”

“Leïka just turned 14 and Django is half her age (seven) but is double her weight (over seven kgs! He's a curvy Siamese). Both are divas who like dinner dates and naps in the sunshine.” 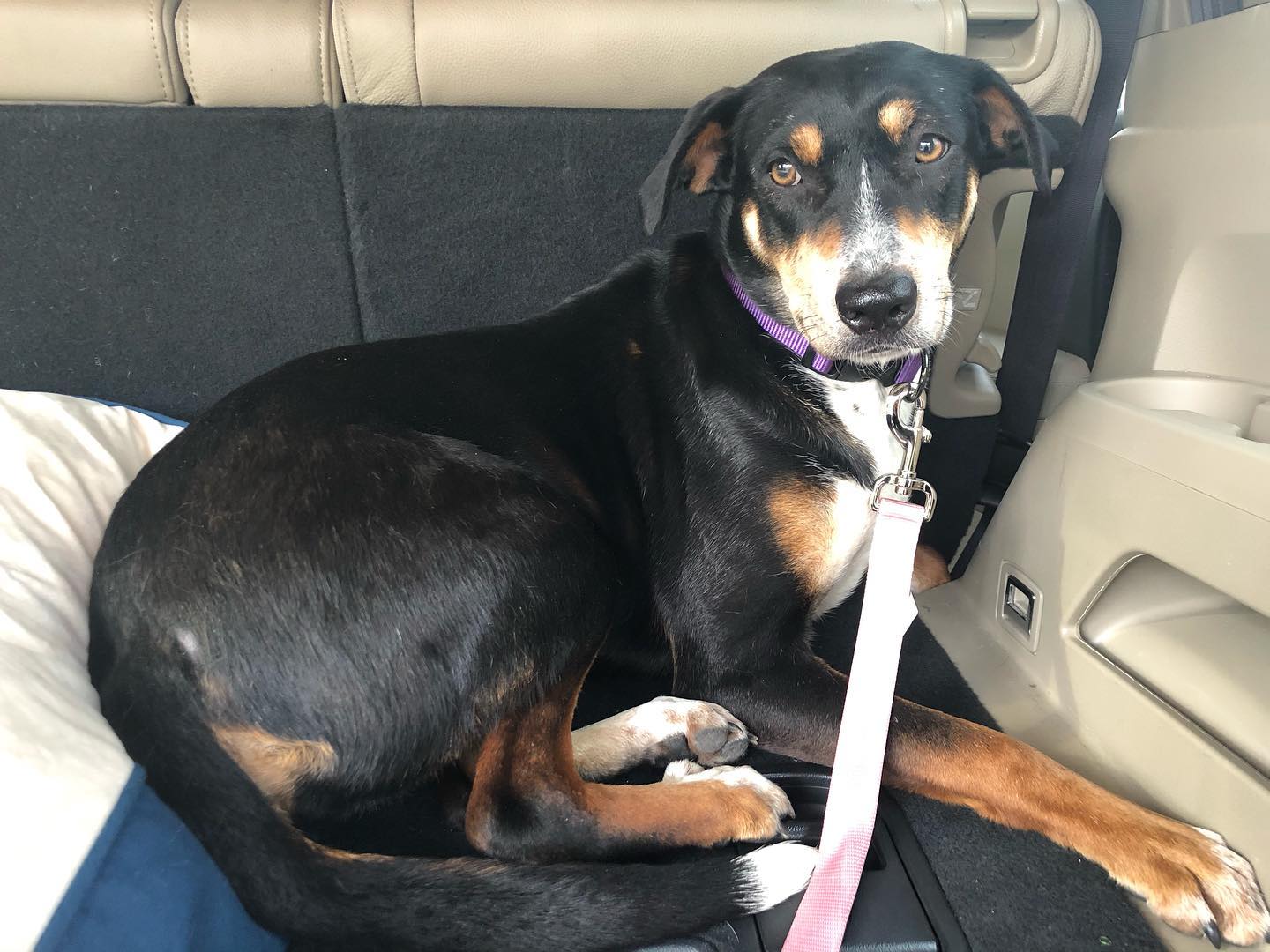 “After our sweet 15-year-old dog Cassie died in 2019, we knew we needed some time to grieve and had no plans to adopt a new dog any time soon. Then came COVID19. With the whole family home (myself, husband, and 14 & 11-year-old boys) and lots of love and attention to give, I was able to convince my husband that we were ready. It was actually very difficult to find a dog that would suit our family and that was also available, as everyone was adopting! Eventually, we found Ellie in Alabama and she came all the way up here to New England to live with us, her forever family. She's a cattle dog/shepherd mix and she LOVES to ‘herd’ my kids, loves belly rubs and has tons of personality. Best decision ever!

“Both of my kitties are rescue cats! Basia is a Ragdoll with a big personality who flops on my arms when picked up, strongly nudges my hand with her nose to ask for pets, loves toys and strings, and is my morning alarm clock as she jumps on me to wake me up! Beau is a Himalayan and a little, gentle love bug. Loves snuggles, treats, and sitting on my lap while I work- he has made many debuts on video calls throughout the pandemic!” 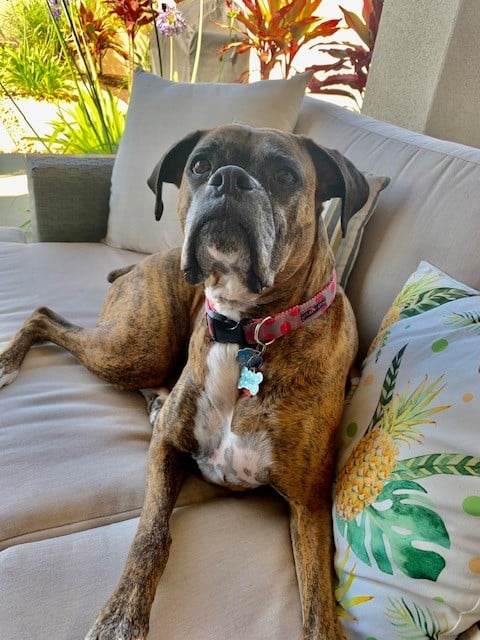 “Harlee has been part of the Hardy Household for almost eight years and she is a Boxer through and through—a playful, romping clown, dignified, loyal guardian. Boxers are also known as the biggest lap dogs. Harlee loves chasing birds at the local park and watching TV on the couch (and you can often hear her barking at the mailman in the background of calls).” 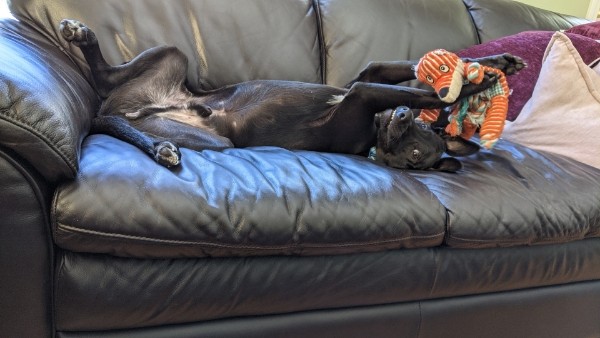 “We adopted Remy the day before Thanksgiving 2020. We thought he looked very regal, so we liked the name Remington, but it quickly became Remy for short. Remy is a very shy, anxious dog, but so so smart. He sits so awkwardly all the time and loves giving high fives! If he's bored and has a toy on the couch he will play with it in his paws upside down!” 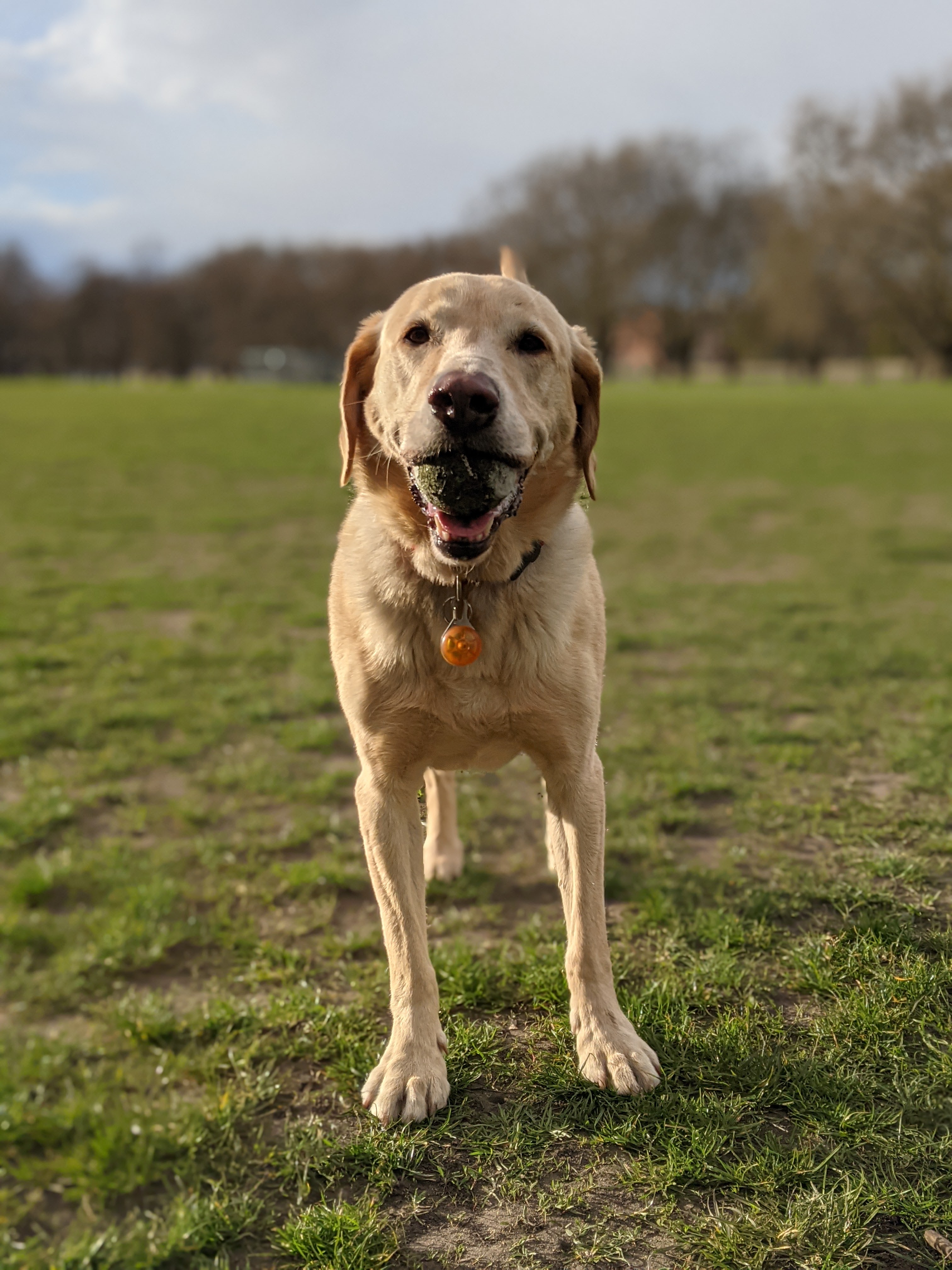 “Solly isn't technically my dog :) My wife has never had a pet, and I had a Labrador growing up (called Madra Mor - which is Irish for Big Dog) and she's heard me go on and on and on about Madra. We live in a small London flat, so can't get a big dog ourselves, so we signed up for Borrow My Doggy, an app that matches you with dog owners in the area. Every Tuesday after work we take Solly out to the park in summer, or just for walks in winter. He's obsessed with his tennis ball and spends the entire time playing fetch, and if you take a break he lets you know it’s time to throw again! He's got no interest in other dogs, while they all meet and play in the park, he actively avoids them and just wants to play fetch! He also smiles when he sees you, with a toothy grin!”

“These three ragdolls have loads of energy even in their teenage years. They're very happy to have people home all the time to give them extra love and treats. Missy likes car rides and sitting in front of my monitors for attention. Katie and Cally are sisters from the same litter. Katie's nickname is Crazy Katie and she spends her days getting the zoomies and bird watching. Cally enjoys relaxing on the deck and soaking in the rays.” 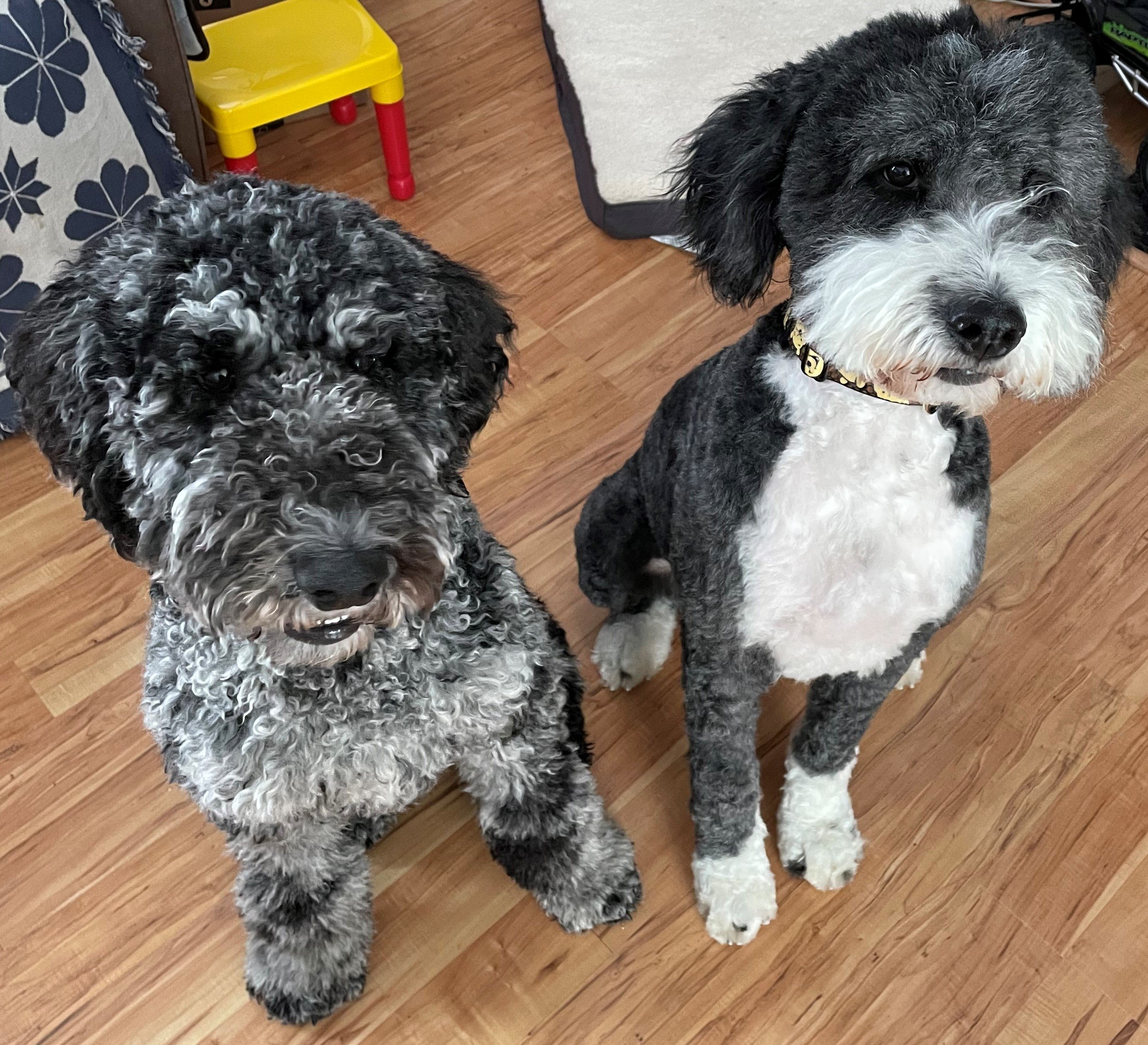 “Both my dogs Winnie and Oreo were adopted during the pandemic. We got Oreo first as a puppy back in July of 2020 and six months later we adopted Winnie. Oreo is a Golden Doodle whose colors look like a crushed-up Oreo cookie. Winnie is a two-and-a-half-year-old Bernadoodle that we adopted from a breeder when they decided they didn't want to breed her in their program. Both have been the most amazing loving dogs we could ask for. Oreo is the goofiest dog and has a habit of running into everything because he never looks forward when he runs. Winnie would much rather just be pet and never leave your side yet puts up with Oreo's crazy antics.” 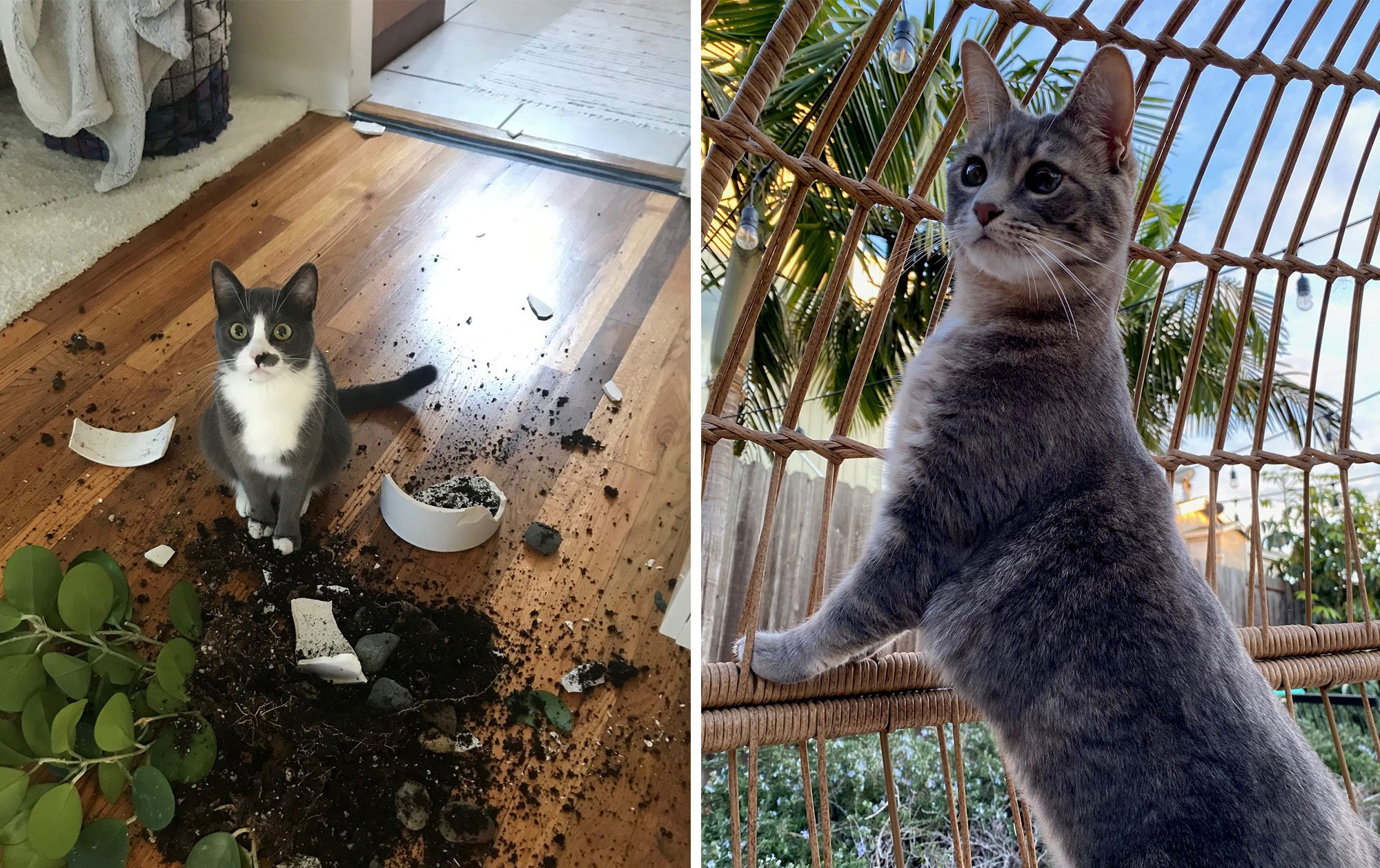 “Kiwi is the most lovable, snuggly cat ever. He loves being picked up and held like a baby. We joke that he’s part raccoon—he gets into EVERYTHING, is really good at hunting (ugh), and yells nonstop when he wants something. He’s annoying, but also the best.

Clementine is an actual cream puff—she’s a bit chonky, her fur is extra soft and plush, and she has the sweetest disposition. She loves food and will do anything to get it. To wake us up in the morning, she gently sniffs your face and tickles you with her whiskers.” 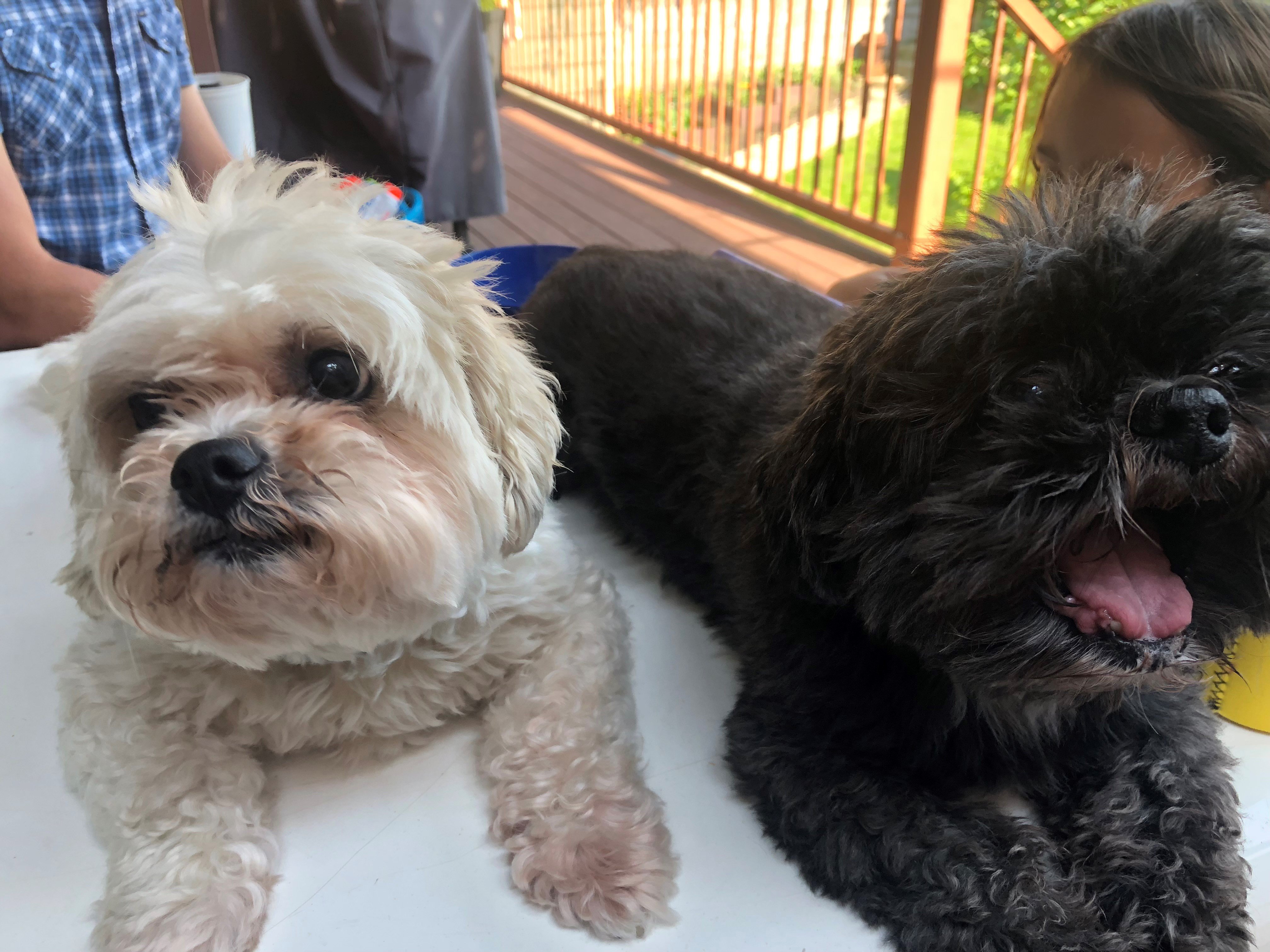 “At the geriatric age of 98 (in dog years), Phil and Davis could not be more different. Davis hangs at my feet all day long and is loving me working from home. Phil sleeps under the couch all day and gives me a dirty look every time I come out of my office.”

“I had always wanted a French Bulldog, so when the pandemic hit last year and my living situation was changing, it felt like no better time to finally start looking for my dream puppy. I am also an avid Red Sox fan, who was devastated when they traded Mookie Betts to the Dodgers, but had always wanted to name my puppy Mookie, so the name stuck! Mark and I got Mookie last fall and he has made the last few months a ton of fun. He can be a ball of energy with his 'zoomies' around the living room or a lazy couch potato and nap three+ times a day but always manages to keep things interesting and keep us entertained. He was our favorite part of 2020.” 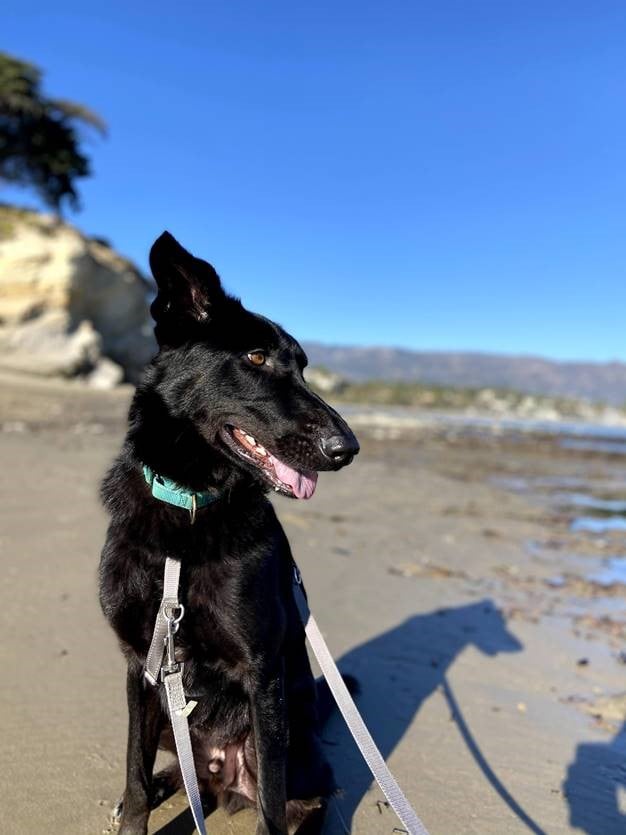 “My wife and I adopted Kessel from a Los Angeles rescue shelter around the start of the pandemic. He's a bit of a Star Wars dog, as he's named after the famed Kessel Run completed by Han Solo in 12 parsecs. He's a lab/German shepherd mix, but we believe he has some greyhound in him, too. The quirkiest thing he does is lean against walls and stare into the distance. Kessel loves playing tug of war with his toys but is also incredible at not destroying them. He's sat through so many Zoom calls that he knows any sort of "goodbye" means he can stop sleeping and get ready to play. Most of all, he's an incredible sweetheart who takes care of us when we need it most, which usually means giving us kisses all over our faces.”

Career Conversations Series: Meet the Expert! Dana Shell Rolls with the Punches and the Partnerships